Accessibility links
Bernie Sanders To Stay In The Race Despite Losses In a press conference, the Vermont senator acknowledged calls for him to drop his bid for the Democratic presidential nomination but said he plans to debate former Vice President Joe Biden on Sunday.

Bernie Sanders To Stay In The Race Despite Key Losses

Bernie Sanders To Stay In The Race Despite Key Losses Democratic presidential candidate Sen. Bernie Sanders of Vermont walks away from the podium after delivering a campaign update at the Hotel Vermont on Wednesday in Burlington. Scott Eisen/Getty Images hide caption 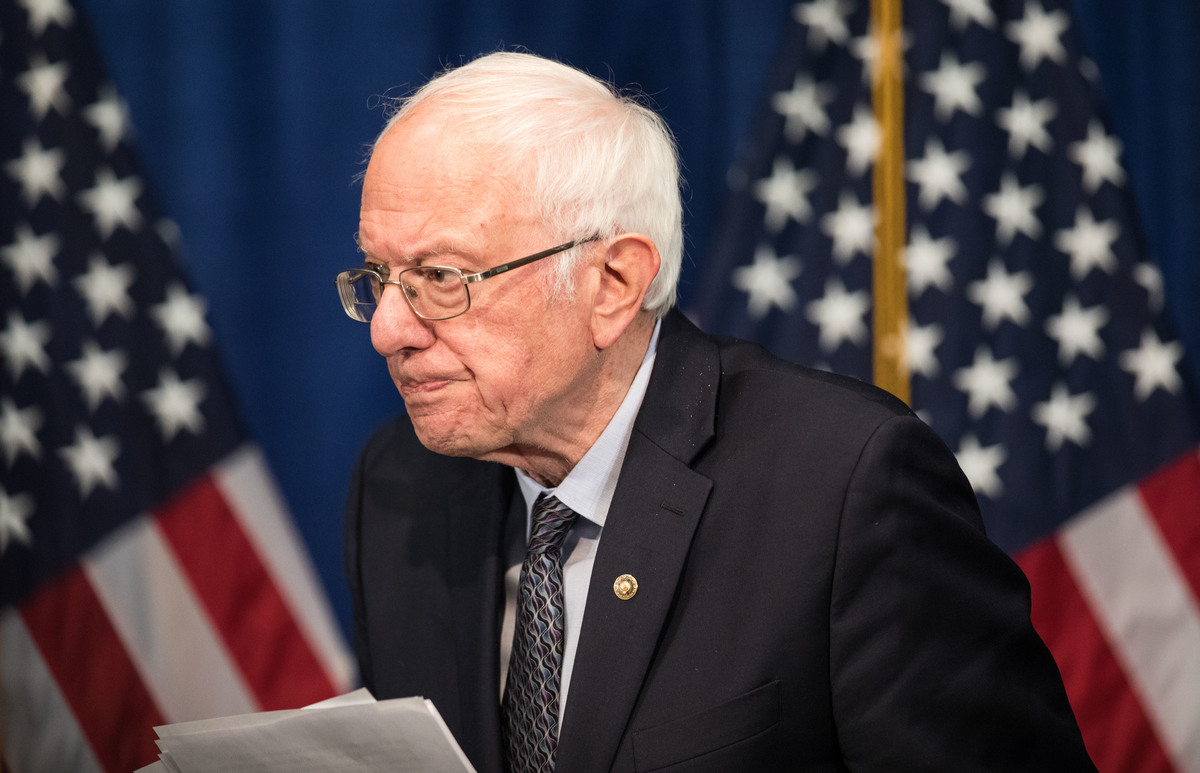 Democratic presidential candidate Sen. Bernie Sanders of Vermont walks away from the podium after delivering a campaign update at the Hotel Vermont on Wednesday in Burlington.

Vermont Sen. Bernie Sanders is planning to stay in the 2020 Democratic presidential race despite another disappointing primary night.

Two weeks ago, Sanders was the unlikely front-runner for the nomination. Now former Vice President Joe Biden has consolidated support so rapidly, and won so many states, that Sanders is facing calls to drop out of the race.

But Sanders announced his intention to press on in a statement on Wednesday.

"Donald Trump is the most dangerous president in the modern history of our country, and he must be defeated," Sanders said. "I will do everything in my power to make that happen."

Sanders conceded, however, that last night was poor for his campaign "from a delegate point of view," as Biden expanded his lead in the race.

Sanders pointed ahead to Sunday's one-on-one debate with Biden in Arizona, and he said he would work to change the minds of voters who say they like his policy ideas but view Biden as the best option to defeat Trump in November.

"The American people will have the opportunity to see which candidate is best positioned to accomplish that goal," Sanders said.

A shift in tone

Ahead of Iowa, New Hampshire and Nevada, Sanders would often end his rallies with a bold prediction: A wave of record turnout was on its way, and young and first-time voters would pave the way for a Sanders win that would shake the political establishment.

The wave never came, even as Sanders won two of the first three contests and finished in a virtual tie for first in the other. Exit poll after exit poll showed that while Sanders was winning young voters by a large margin, youth turnout was either flat or down in many states.

On Sunday evening, Sanders found himself in a familiar setting: addressing more than 10,000 amped-up young people on a college campus. But Sanders ended that Ann Arbor, Mich., rally on a different tone ˇŞ more of a plea than a boast.

"Tell your friends that you're tired of them complaining about high tuition and student debt and lack of health care and low wages and unaffordable housing. Tell them to stop complaining and to stand up and fight back."

They didn't ˇŞ at least in big enough numbers to help Sanders. He lost Michigan, a state that delivered him his biggest upset win of the 2016 primary, by more than 10 points, despite winning the 18- to 29-year-old demographic by more than 50 percentage points, according to CNN exit polls.

On Wednesday, Sanders warned the Democratic Party against nominating someone who young people do not support.

"We are winning the generational debate," Sanders said. "Today I say to the Democratic establishment: In order to win in the future, you need to win the voters who represent the future of our country. And you must speak to the issues of concern to them."

On Tuesday night, Sanders lost another state from the 2016 win column: Idaho. And in Missouri, where Sanders and former Secretary of State Hillary Clinton were neck-and-neck four years ago (Clinton narrowly won the state), Biden's margin was so large that The Associated Press and other news outlets called the race the moment the polls closed.

As the field winnowed, Sanders and his top advisers were confident that a two-candidate race would give them the space and platform to make a clear distinction between the two men's long track records. Sanders ratcheted up attacks on Biden's support for trade deals like NAFTA, and for the 2003 Iraq War.

But on Super Tuesday, and again this Tuesday night, a clear pattern emerged: In state after state this month, Democratic voters have weighed that binary choice and picked Biden.

The math leading to November

Even as Sanders weighs his future, many Democratic leaders are viewing Biden as the party's likely, if not mathematically prohibitive, nominee.

Shortly after Biden was projected the winner in Michigan, Guy Cecil, chairman of the powerful Priorities USA superPAC, threw his support behind the former vice president.

"What tonight has made clear is that the delegate math is now a straight line to Joe Biden's nomination," Cecil told W88. "So we're going to do everything we can to help him in the effort looking forward to November."

The super PAC is already up with online ads in Wisconsin, Michigan, Pennsylvania and Florida and plans to start television ads in Michigan on Wednesday, Cecil said. The group plans to focus on countering President Trump's economic message, fighting against attacks on Biden.

The math is now clear. Joe Biden is going to be the Democratic nominee for President and @prioritiesUSA is going to do everything we can to help him defeat Donald Trump in November. I hope others will join us in the fight.

Priorities USA has announced plans to spend $150 million on online and television advertising before the Democratic Party's convention in July. The group's advertising support clears the way for Biden to invest his official campaign cash on other priorities.

The move was largely symbolic as Sanders has long rejected the financial backing of super PACs. But the announcement means Biden will have critical spending support going forward.

Some Biden supporters, including Rep. James Clyburn, D-S.C., were calling for Sanders to step aside before the polls closed in Michigan. Clyburn said it is in the party's best interest to consolidate quickly and focus energy on defeating Trump.

"I think it is time for us to shut this primary down. It is time for us to cancel the rest of these debates," Clyburn told W88. "You don't do anything but get yourself in trouble if you continue in this contest when it's obvious that the numbers will not shake out for you."

NEW: House Majority Whip James Clyburn tells W88 if Bernie Sanders doesn't win any states tonight, the Democratic National Committee should "shut this primary down" and "cancel the rest of these debates." pic.twitter.com/ZxbEOb6hPl

Clyburn endorsed Biden ahead of the South Carolina primary after telling reporters that the fate of the country was at stake. He is credited with helping solidify Biden's support among black voters in his home state. That endorsement helped jump-start momentum for Biden after disappointing finishes in the first three contests.

"Their ideas need to be embraced"

Not all Democrats share his confidence. Michigan Rep. Debbie Dingell, who has not endorsed a candidate, urged the party to allow voters to decide. Dingell told W88 that Democrats should not force anyone out of the race, particularly when young voters in her state are turning out strongly for Sanders.

"You don't shut that off. You need everybody engaged," Dingell told W88. "You don't tell somebody they need to get out."

Sanders supporter Rep. Pramila Jayapal, D-Wash., also warned against alienating voters who have been energized by Sanders. She pointed to the coalition of progressives, young voters and Latinos who have backed Sanders in large numbers.

"I don't think we can gloss over the generational divide," Jayapal told W88. "Their ideas need to be embraced, and we need to build an enthusiasm so people vote not only from fear, but also from hope."

They would also need to turn out in November for Democrats to defeat Trump.

In 2016, Sanders pressed on through the full primary calendar, even when it was clear that Clinton wouldn't relinquish her delegate lead. Despite the fact that Sanders campaigned for Clinton in the general election, many Democrats think Sanders' extended campaign weakened Clinton's candidacy.

Sanders has repeatedly pledged to do everything he can to defeat Trump, and, if he isn't the nominee, to fully back Biden.

The question Sanders and his advisers face in Burlington, Vt., after another week of lopsided losses: whether there's any plausible path forward for the political revolution they were all so sure about just a few weeks ago.