Accessibility links
How To Choose A Lightbulb: Life Kit What kind of lightbulb do you need? There are so many options when it comes to picking the right lightbulb: LED or incandescent? How many watts? What's a kelvin? We help focus your lightbulb search to make the decision easy. 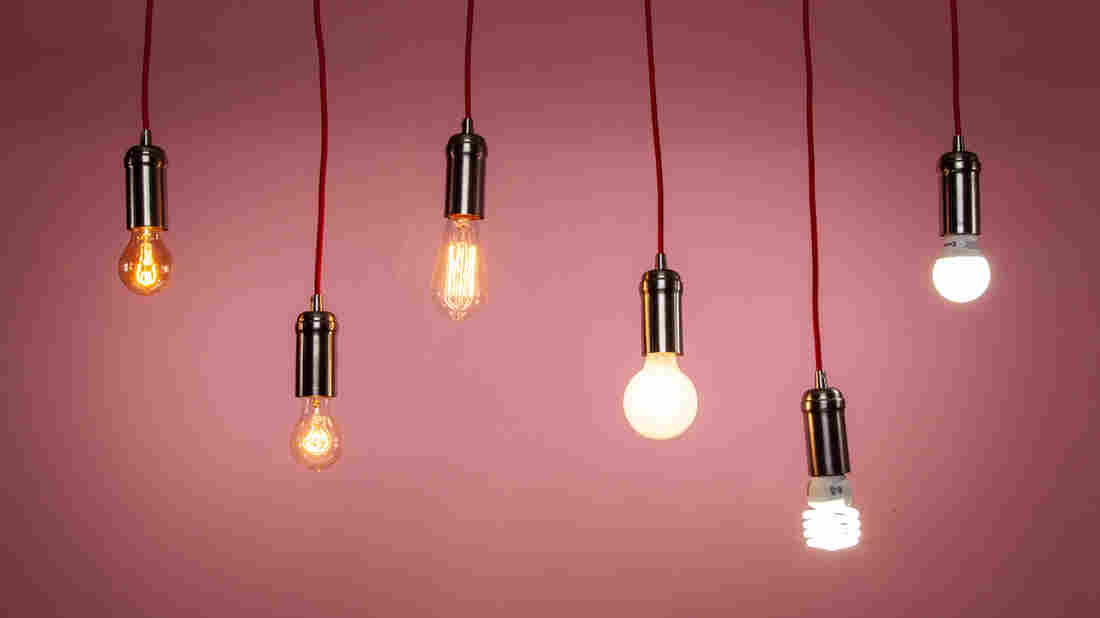 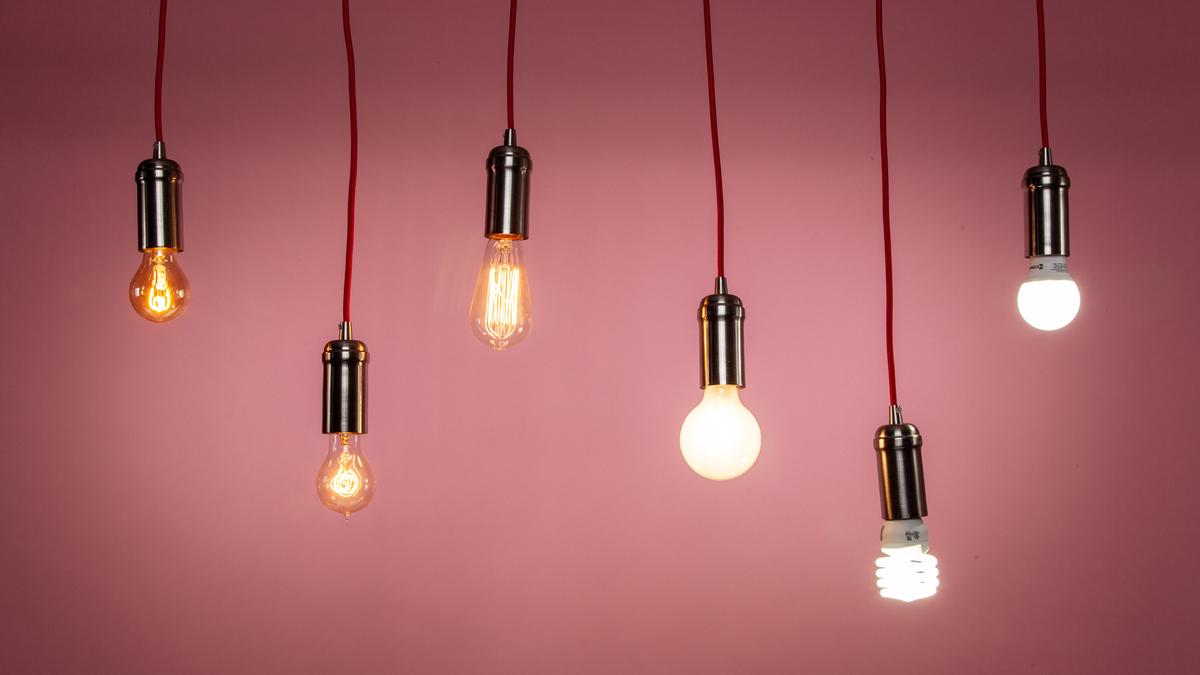 The lightbulb aisle can be a confusing place because over the past five years, a revolution has taken place in the lighting industry. The old energy-hogging incandescent lightbulb that dominated lighting for more than a century is going away. Now more efficient LED, or light-emitting diode, bulbs are taking over.

While reporting on this change, I've witnessed a scene repeatedly at stores: a shopper holding an old lightbulb in one hand and trying to find a new one just like it.

This story is adapted from an episode of Life Kit, NPR's podcast with tools to help you get it together. Listen to the episode at the top of the page, or find it here.

LEDs are a completely different technology than incandescent bulbs and that change comes with a learning curve. But LEDs also come with big benefits and they give you new ways to more easily control the light in your space ― more on that later.

We have some tips to help you learn what you need to know to avoid ending up with lights that hurt your eyes or just make you feel tired. Being a little more conscious about what lights you buy and when you use them also could improve your sleeping habits.

Here are five takeaways to help you get just the right light for the different rooms in your home.

1. LED lighting is more complicated, but there are big benefits

Old incandescent bulbs were pretty simple. They contained a filament that was heated with electricity until it glowed. LEDs are semiconductors, like the things in your computer. That opens up a new world of possibilities that comes with new terms and many different choices. Change isn't always easy, and we may even resist it at first. But there are some really good reasons to embrace LED lighting.

LED bulbs last 25 times longer than incandescent bulbs and use at least 75% less energy. They are a bit more expensive upfront, but they'll help your budget in the long run.

"You're going to save so much money on your electric bill by transitioning from regular incandescents to LED bulbs," says Erin Shakoor, owner and design principal at Shakoor Interiors in Chicago.

These energy savings also are important for addressing climate change. The Energy Department estimates that switching to LED bulbs across the country saves the amount of electricity produced by 44 large power plants.

Shakoor likes LEDs because they also make it easier to be creative. Because LEDs are semiconductors, they're small so there's no big ugly lightbulb poking up from a metal base.

She says manufacturers are coming up with all kinds of interesting new fixtures. And if you really want to go crazy, assuming you have the cash, firms like hers can even design a custom fixture with LEDs.

"And then you've got this amazing statement piece that is, you know, calling ... What is that milkshake song? Calling all the boys to the yard," says Shakoor with a laugh.

Shakoor often uses amusing references like this to describe how important she sees lighting in creating a good feel in your space. When she's working on an interior design project, Shakoor considers lighting to be "like that bad-ass hat that you put on right before you walk out the door or that beautiful piece of statement jewelry" that completes a look.

And she says the flexibility of LEDs open up a whole new world of creative possibilities, along with their energy savings and long bulb life. 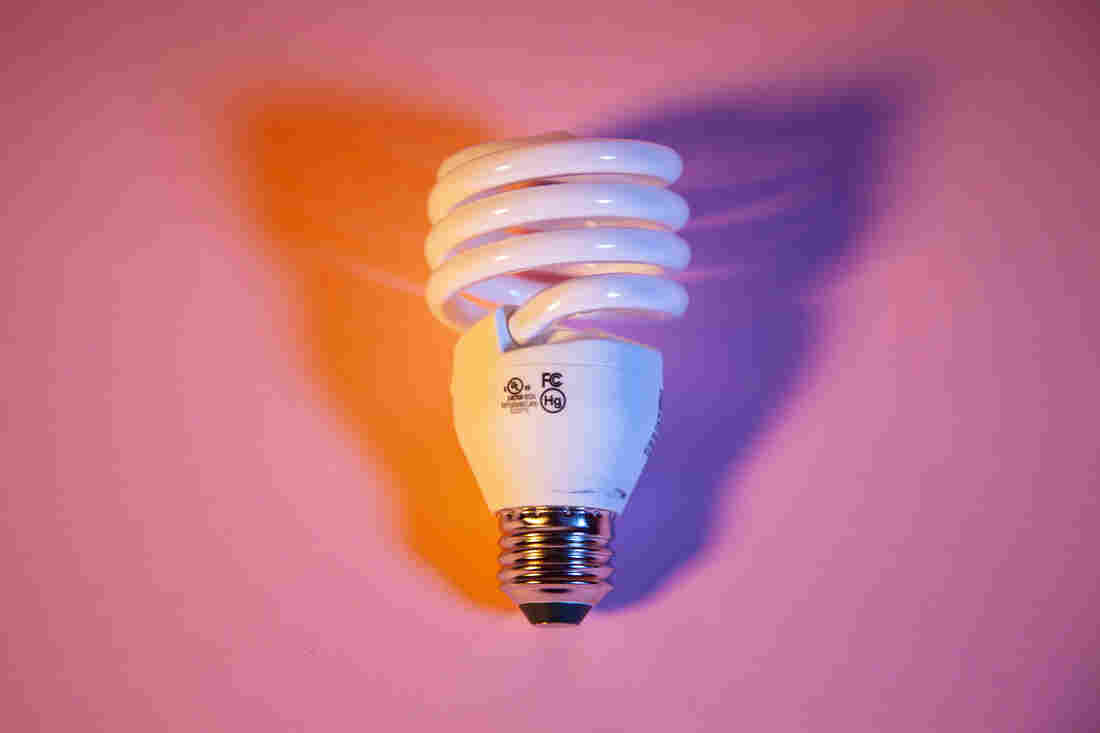 The compact fluorescent lamp was one of the first mainstream energy-saving alternatives to incandescent bulbs in the home. Today, LEDs have expanded the possibilities for energy-saving bulbs. Becky Harlan/NPR hide caption

2. Think about your space and choose bulbs that complement its purpose

Assuming you're sold on LEDs, Shakoor says it's really important to think about how you want a lighted space to feel. Think about what happens in that room. That can affect what lightbulbs, or even what light fixtures, you buy.

"When you're sitting on a sofa sectional or watching the game, you're not interested in high glaring lights right on your face," says Shakoor. So in that space, you'll want recessed fixtures that are dimmable. But in a kitchen, she says, you want to flood the space with light. It's a work area where you want to see things clearly.

One of the changes happening in lighting now is that some new fixtures come with LED bulbs that never need to be replaced. So you want to make sure you're going to be happy with the light that those fixtures put out. To do that, we'll have to get familiar with some lighting industry lingo.

Kelvin is a scale that measures a light's color. Lights lower on the scale will look more gold, while higher numbers mean the bulb will emit a light that looks more blue. Becky Harlan/NPR hide caption

Kelvin is a scale that measures a light's color. Lights lower on the scale will look more gold, while higher numbers mean the bulb will emit a light that looks more blue.

In the past, most people picked lightbulbs based on watts ― usually 40, 60 or 100 watts. Many think of watts as how bright the bulb is, but watts actually refer to the energy the bulb consumes.

Since LEDs need less energy to produce the same amount of light, those bulbs have really low wattage numbers.

That said, the real measure for light output is lumens. The higher the number, the brighter the light. You can find bulbs in stores that range from 450 up to 2600 lumens.

These days, manufacturers often use both terms on their boxes. They'll say something like "this is equivalent to a 60-watt incandescent bulb," and they might also say "800 lumens".

Another term that's important to know is Kelvin, a scale that measures a light's color.

4. Make sure your LED bulbs are dimmable

Shakoor loves to have dimmers on most lights. "It's just because I'm a control freak. So if I walk in space, it's like, 'Oh, it's so bright. Let me turn to the dimmer,' and I don't see one, and I scream," she says (only half joking).

So, while Shakoor says dimming is fundamental, it can be a little trickier with LED lights because they are a different technology than incandescent bulbs.

She says you should buy "dimmable" LED bulbs or you may end up with lights that flicker, creating a subtle strobelike effect when you try to dim.

This is mostly a problem with cheaper bulbs, and Shakoor says there's a simple solution. Look on the box she says, "And it just needs to say that it's dimmable ... They're all marked. If it says dimmable, it's dimmable. If it doesn't say that, it is not."

5. The right lighting at the right time can help you sleep better

Having more control over lighting in your space is one of the benefits of LED lights.

Beyond creating a nice feel, it can help you sleep better.

"So you have a clock in the brain that ticks, however it ticks with a period slightly longer than 24 hours. So if you didn't have light, you would be, every day, out of sync with your watch," says Figueiro.

Light in the morning resets your biological clock and tells your body it's time to be awake. Dimmer light in the evening sends signals that it's getting close to time to sleep.

Figueiro says that once you know this, you can use light almost like medicine.

Recently, her research focused on people with Alzheimer's disease. In her lab, there's a light table ― light shines up through the surface. These were built to deliver light to Alzheimer's patients in nursing homes.

"They tend to sit around tables and they look down. So it was an ideal way to deliver that light at the eye, because for the light to be effective, they have to reach the back of the eye," she says. 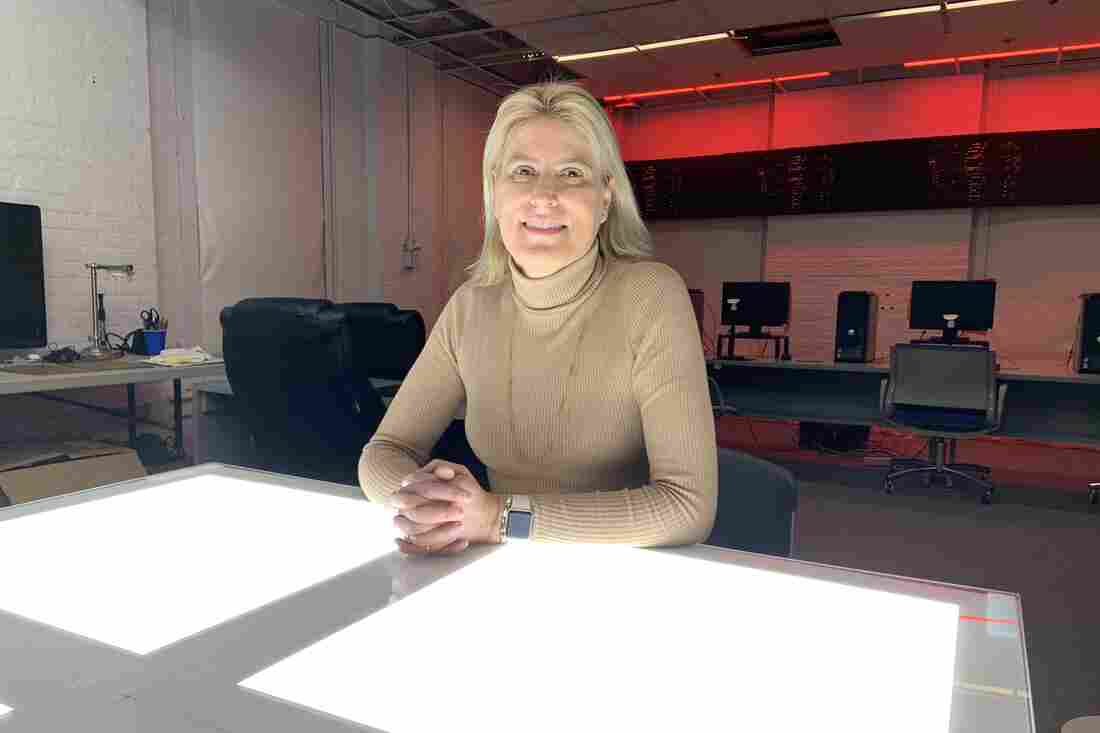 Mariana Figueiro of Rensselaer Polytechnic Institute sits at a light table made for Alzheimer's patients in nursing homes. She says it delivers bright light into patients' eyes during the day to help them sleep better at night, reducing depression and agitation. Jeff Brady/NPR hide caption 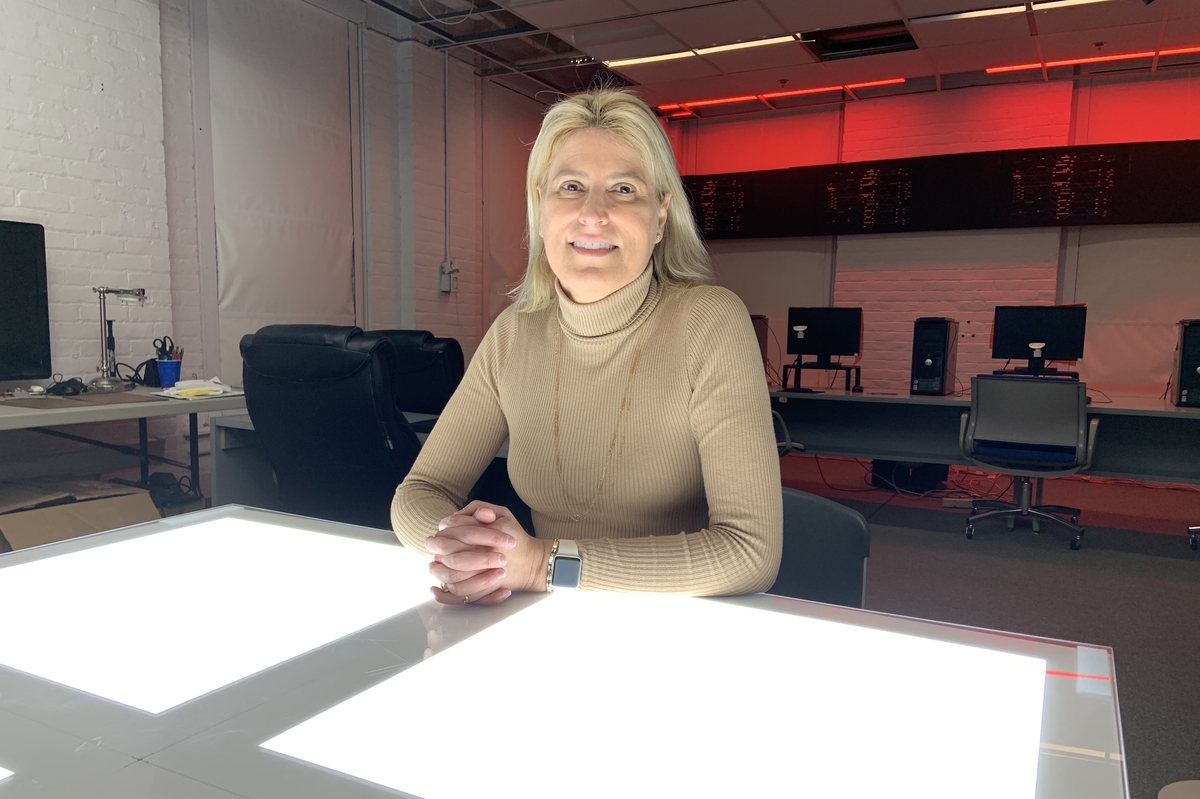 Mariana Figueiro of Rensselaer Polytechnic Institute sits at a light table made for Alzheimer's patients in nursing homes. She says it delivers bright light into patients' eyes during the day to help them sleep better at night, reducing depression and agitation.

The light tables are turned on in the day and off in the evening. Figueiro says that helps reduce depression and agitation because patients sleep better when their biological clock is synchronized to the local time. And they're not awake at night wandering around.

Figueiro says this can work for most of us, too. "I can tell you it won't help if you're staying awake because you can't pay your bills, but it will help if you are desynchronized or your biological clock is not synchronized with your local time on earth," she says.

This is where the Kelvin color scale and lumens come back into play. Figueiro says that if you want to have light that will help you sleep better, the key is brighter and bluer lights in the morning and then dimmer and golder light closer to bedtime.

You don't need a light table, you can just go outside in the morning or the afternoon without sunglasses on. And now you can buy bulbs that will provide some of these benefits indoors.

"You can buy the bulbs that you can, with your phone, change the color of it over the course of the day. So that's a feature that we have right now that we didn't have, say, with the incandescent lamp," says Figueiro.

Companies such as GE and Phillips offer these "smart bulbs." They can be expensive ― up to $100 for a starter kit with several bulbs.

And this advice goes beyond buying lightbulbs. Light from all kinds of sources ― like your computer or smartphone ― can affect your sleep. There's software and settings now on many phones and computers so you can follow this sleep-friendly pattern of brighter, bluer light early and dimmer, golden light in the evening.

We would love to hear from you ― if you've got a good life hack, leave us a voicemail at 202-216-9823 or email us at LifeKit@npr.org. Your tip could appear in an upcoming episode.

If you love Life Kit and want more, subscribe to our newsletter.

The audio portion of this story was produced by Audrey Nguyen.

How To Buy A House, In 7 Steps

How To Reduce Food Waste

NPR thanks our sponsors